Vitamin C: too little too late?

There is always a low enough dose given late enough to show no effect whatsoever.


Dr. Fowler research group finished their phase II trial of intravenous vitamin C for sepsis (CITRIS-ALI) last year. Since they hadn't preselected mortality as main outcome the reduction in mortality cannot be asserted as proven in the statu quo mind. It seems there could have been bureaucracy reasons behind not including it as main measure as pointed out by Dr. Farkas. Let's make clear two things:
So, proof shouldn't be used at all in most of medicine literature. Instead we should be talking about enough clues to suspect an overall benefit, that is, we should be talking about benefit/risk analysis and certainly 5% is no magical number at all in that conversation. I have to point out that I side with Fisher's interpretation of the p-value as a measure of how strong the evidence favoring the hypothesis is, and not with Neyman's one (the prevalent one) where it doesn't matter how much lower than 5% a computed p-value is and where a p-value of 5.01% is deemed statistically insignificant. I will dig deeper on this at the following section.

At the other hand, just some months after Dr. Fowler's group results, those of the VITAMINS trial were published. Instead of focusing on Dr. Fowler's approach it studied Dr. Marik's miscellaneous approach. Dr. Marik studied the efficacy of a mixed treatment including vitamin C, hydrocortisone and thiamine (vitamin B1) on sepsis with a historical control group instead of a concurrent randomized one. VITAMINS trial was a randomized trial instead that studied the combined treatment against hydrocortisone alone. There are some people saying that it falsifies vitamin C efficacy and any tentative hypothesis from CITRIS-ALI. This is false.


Mortality as THE objective main measure


Should we discard mortality results as THE most important measure conceivable within a clinical trial where deaths are expected? Certainly it is my opinion that it must not be, as I have focused always on it alone beforehand and I have clearly stated that focusing on soft outcomes is NOT a good idea even when it came from Linus Pauling.

Mortality being the main objective measure of any clinical trial with expected deaths means that we should evaluate the strength of a trial results on it using Fisher's approach. It REALLY matters where that p-value stands by itself without no comparison whatsoever with any α-value (Neyman's approach, usually with α=5%) and without requiring taking any look at any other measure at all. Not so strongly worded there are those expressing similar preoccupation:


'there is something disquieting to me about this business, that whether a result for an important endpoint like mortality is considered “significant” or “not significant” based partly on how many other outcomes the authors decided to consider.'

In my view mortality should come first and alone and anything else is just methodolatry where secondary measures are given bureaucratic importance that they don't deserve at all. Just ask a patient if after a treatment they prefer either to still be alive or just in the case of still being alive to have arrived to a better whatever score. I am not alone on this either:


"As a patient, I probably don’t care that much if my SOFA score improved, I care whether I walked out of the hospital alive."

That's the difference between aseptic mathematics where Neyman's approach gives rise to very consistent and clear hypothesis testing even in the presence of multiple comparisons and the dirty reality where mortality objectively rules over anything else to be measured and Fisher's approach (while not as amenable to a multiple comparison adjustment) gives us a reasonable measure of strength of the evidence favoring effectiveness of treatment on THE objective main measure through its p-value and corresponding conditional posterior probability type I error α(p).

Paradoxically the statu quo actually uses the mortality as main objective measure as such in any posterior meta-analysis focused on mortality without any multiple comparison adjustment whatsoever.


As I have stated beforehand I think it is not defensible at all to study an intravenous vitamin C intervention lower than 3g/day for less than 5 days. Of course even this dose timing and duration given too late is not going to do a thing.


We see how something like 16 g of vitamin C each day (dose for a 80 kg person, approximate average weight in the VITAMINS trial) doesn't get all of the patients over the marginally deficient level of 28 μM pointed out by Fowler et alter at day 4. By day 7 we see how three quarters of those receiving treatment are below the kidneys reabsorption level (70 μM) and more than a quarter are already marginally deficient. Ideally treatment should be given for as many days as needed until the patient is cured. Not what we see in actual randomized control trials. Of course at the current state of things, we should take a closer look at mortality at treatment end point. Of course we can take a look at mortality in following days in order to discard a possible delayed toxic effect from vitamin C.

In the case of CITRIS-ALI vitamin C was given intravenously for 4 days in the intervention arm. They measured mortality for the 28 first days after beginning the trial. So I am going to point out mortality from enrollment in the trial until the 4th day was completed and from this point forward until the last of the 28 days.

We see how mortality is clearly different in the vitamin C group during treatment duration with the posterior conditional probability of sheer chance giving rise to these results being 1.3% or greater. Even a more classical interpretation à la Neyman with multiple comparison with Bonferroni correction (dividing α by the number of measures, 49 specified in the CITRIS-ALI trial plus the two pinpointed out by Dr. Fowler at LIVES 2019 conference) give rise to a statistically significant result:

Since these two measures have been added after trial completion, perhaps it could be more correct (not that any post hoc selection of α agrees with Neyman's view) to say that it is statistically significant at the 5%•(1+1/50+1/51)=5.2% level.

We also can see how mortality is not clearly different after treatment completion (days 5 to 28) but without any sign of worst outcome due to delayed vitamin C toxicity.

In the face of these results any critical mind would apply the intravenous vitamin C treatment for 4 days at least to any septic patient with a low enough probability of side effects while awaiting for other randomized trials to settle the lingering doubts due to researches not including mortality as main outcome in CITRIS-ALI trial.


First I will point out the main characteristics of these three randomized trials on critical ill septic patients, where treatment is not applied until severe complication of sepsis such as either acute respiratory failure or septic shock is ascertained:


Why treatment in VITAMINS was applied in average only half the time prespecified? The treatment was interrupted for three reasons:
These and the number of patients being given vasopressors (treatment of septic shock) in VITAMINS let us know more or less how many patients received treatment each day. 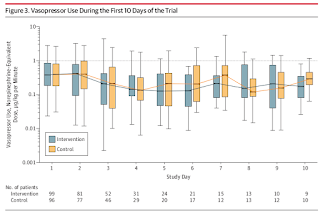 By day 3 only half of them. By day 4 only a third. It is not clear to me how many of the deaths happened after treatment was withdrawn.

Although in CITRIS-ALI corticosteroids weren't included in the protocol, something like 66% of all the patients received them during the study in an unspecified dose. These all being said I think it should be cristal clear that CITRIS-ALI used a superior study design (double blind instead of open-label) that was followed more thoroughly (until ICU discharge instead of initial septic shock resolution) and with a clear intervention to judge vitamin C effectiveness. VITAMINS could only conclude that vitamin C and hydrocortisone effects are not synergistic at most (as pointed out by Dr. Carr too). Although being smaller, Zabet et alter double-blind study supports either this conclusion (it used no corticosteroids) or that time to intervention really matters.

We don't know how much time was wasted in Zabet et alter until beginning intervention but we can speculate that it must have been lower than the median value of 12.1 hours with interquartile range of 5.7–19.0 hours in VITAMINS, that is, almost three quarters of patients in VITAMINS awaited more than 6 hours for the first dose of vitamin C after eligibility criteria were met. As pointed out by several Dr. Marik's colleagues at Critical Care Reviews 2020 this time in the rest of interventions presented on the conference seems to have been limited to 6 hours. Neither Dr. Marik's paper on his non randomized study nor Dr. Fowler's one on his randomized one specifies the distribution of this time to first dose either. Nevertheless we have very interesting  results on 28 day mortality of the study by Ping et alter (2020), a partially single-blind (placebo used only on 12 of 40 patients in the control group) randomized study replicating Dr. Marik's 4 days intervention on septic patients:
Either way it seems to me that delaying treatment until the patient is severely ill and then applying a meager dose is NOT justified at all. The meager dose is certainly Dr. Marik's fault.


Conclusion: too much too soon?


Let's remember the dose of vitamin C used by Dr. Klenner on a severe case of sepsis:


"In another case, using 1200 mg. per Kg. of body weight the first 12 hours, in divided doses, and 600 mg. per Kg. body weight in subsequent 24-hour periods, in divided doses, a patient with advanced puerperal sepsis following a criminal abortion was returned to normal in 9 hours. Penicillin, sulfadiazine and I.V. Achromycin were also employed. The rapidity in which the pathology was reversed can hardly be attributed to these other antibiotics alone. This patient entered the hospital with 105.4° F. and in 9 hours it was 98.6° F. and remained so throughout the uneventful hospital stay."


"He gave a bolus of 50,000 mg Vit C IV over a period of 4 hours. They watched the patient’s pulmonary (oxygenation index) status stabilizing and improving in real-time. "

Let's remember the dose used in Allan Smith just to make his family at ease before disconnecting life support: 50 g in about 12 hours.

Let those who have eyes see.


If your kidney function is correct, you don't have a big oxalate intake and you don't have fat malabsorption (Spanish blog post with links discussing oxalate nephropathy associated with vitamin C consumption), what will happen if you take generous doses of vitamin C by yourself at first symptoms of a suspected viral infection including  SARS-CoV-2?:
What happens if instead you don't take vitamin C?:
Your choice. Good luck anyway.
Posted by Serdna at 6:30 PM No comments:

I have no background at all either on medicine or nutrition. Nevertheless I am fully suspicious of consensus of experts positions, moreover when you can easily find experts outside of the consensus. Hence this English blog.

Since I think I have enough statistical background and reading ability I don't delegate preventive measures about my health anymore.

I have two more blogs in Spanish. One about more or less the same than this one. Another about heat pumps as home heating systems.